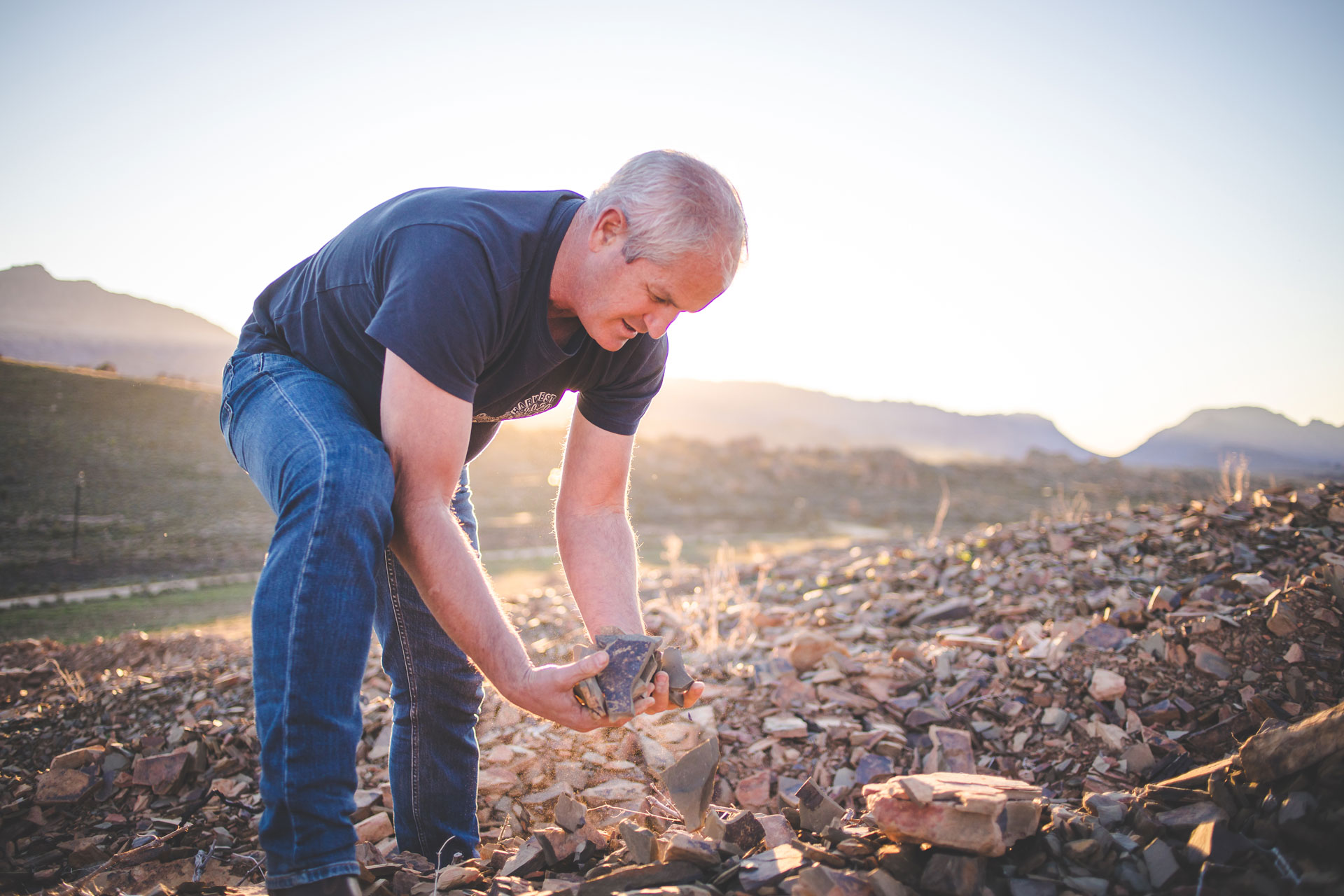 A Brief History of Dwarsrivier and the Cellar

The Khoisan people, who lived in harmony with the natural environment, inhabited the Cederberg area from early times, leaving behind a rich legacy of rock art. Then, during the mid-1800s, another resilient group of people set foot in the remote Cederberg – the Nieuwoudt family.

The first Nieuwoudts arrived in South Africa during the early 1700s. Nearly 100 years later, their descendants moved to the Cederberg. In 1893 the present family moved to the farm Dwarsrivier, which is home to Cederberg Wines. Six generations ago, no one would have guessed that this rugged, fynbos-covered area on the edge of the Succulent Karoo biome would one day become a high-altitude wine farm in the Cape Winelands.

The farm itself lies in the Cederberg Wilderness Area, and of its total 5 500 ha, only 74 ha are under vine. Today, this award-winning winery is owned by David Nieuwoudt, who represents the fifth generation of the Nieuwoudt family. Emma, David's daughter, represents the sixth generation.

Many stories have been told about 'how it all started'. Maybe the first Platter's South African Wine Guide (1980) puts it best: 'Oom Pollie has confounded the experts by producing prize-winning wines on his farm high in the remote Cederberg mountains. He first started making wine for the farm workers with table grapes that ripened too late to be taken in by the nearest co-operative. The venture was so successful that he decided to try his hand at making red wine, and the first vintage in 1977, though too small to be certified the first vintage, was acclaimed by experts as being up to 'superior standards.'

The other story goes as follows: There used to be no vines on the farm. Then, a friend, who worked for the Deciduous Fruit Board, noticed that winter fruit was doing really well on this fruit and tobacco farm. So he recommended that the family plant table grapevines. The Nieuwoudts followed the recommendation in 1965, and the vines did so well that the first wine vines were planted in 1973 – the source of the top-class Cabernet Sauvignon of 1977/8.

David's grandfather, Oom Pollie, and his uncle, Oom Flippie, managed the farm until 1997. In 1997 David returned to the land where he grew up and took over the reins from Oom Flippie. Oom Pollie passed on in 1988 and Oom Flippie in 2010.

The Beginning of a Greater Story

Before the political changes of the 1990s, wine farming was an income like any other kind of farming, be it sheep, fruit or fish. The big names in the industry were well known, of course. Up to 1990 the Nieuwoudts focused on fruit, tobacco, vegetables and livestock. During the 1990s, when sanctions were lifted, farming life changed quite radically and many farmers started specialising.

Younger farmers, in many cases, faced huge challenges – the whole world had suddenly become their playground and delivery field. In the Cederberg, David Nieuwoudt returned to the land where he grew up and decided to focus on wine – after all, that was what he had studied and loved. The year? 1997. The fifth-generation to farm these pristine lands, David has been on an award-winning trajectory since he took over the reins in 1997.

David attended the Elsenburg Agricultural College in Stellenbosch, where he excelled as a student. After completing his studies, he worked at Lievland wine estate in Stellenbosch for a year under the strict eye of then-owner Paul Benade. Then, at the end of 1996, he moved back to the Cederberg, where he took over the winemaking reins from his uncle, Oom Flippie Nieuwoudt.

A mere three years later, Cederberg Wines was awarded a 4.5-star rating in the 1999 edition of the Platter's South African Wine Guide for a Chardonnay, setting this young winemaker on his award-winning trajectory. More recently, the Cederberg Shiraz 2018 won gold at the 2021 Syrah du Monde, which recognises the world's best Syrah wines. Furthermore, Cederberg Wines was placed on Wine Magazine's top 10 wine farms in South Africa twice under his leadership.

Never one to rest on his laurels or stand still for too long, David keeps entering new wine realms and adding interesting ventures to his already busy schedule. His favourite sayings are: 'Keep it simple...' and 'It's as simple as that...' – a principle that's clearly worked for him! A Cellar Taking Its Cue From Nature