On 10 October 2019 (today) – in Australia – the Ghost Corner Wild Ferment 2017 took the honours for Best Sauvignon Blanc at the Six Nations Wine Challenge 2019.

In Sydney, Cederberg winemaker Alex Nel will be celebrating with wine celebrities from Australia, New Zealand, Canada, the USA, South Africa, Chile and Argentina at Manjits at the Wharf in Lime Street. And rightly so, because Alex and owner-winemaker David Nieuwoudt created this magical wine together.

The Ghost Corner series was launched in 2007 with two wines by David Nieuwoudt. Five years later three new wines were added to this portfolio, the Wild Ferment being one of them.

Cederberg Wines makes the Ghost Corner range from grapes collected at the southernmost point of Africa – the place where two oceans meet: the warm Indian and the cold Atlantic. An average summer temperature of 28 °C on this flat, windy plain means one thing: cold climate.
The 2017 vintage received 94 points from Tim Atkin. Through the years, different vintages collected many accolades.
The wines at the 2019 Six Nations Wine Challenge were evaluated by six of the most influential wine judges in the New World: Huon Hooke (Australia), Bob Campbell MW (New Zealand), Michael Fridjhon (South Africa), Patrick Comiskey (USA), Christopher Waters (Canada) and Eduardo Brethauer (Chile). Every year, each of the judges is invited to list their top 100 wines covering 16 typical varietal classes. All the wines are judged blind by numbers. This is not the first time that Cederberg has done well at this event. In 2016, the Cederberg Shiraz 2013 took the all-over Shiraz trophy.

Soil types and harvesting: Bokkeveld slate, Koffieklip and Gravel. The vineyards are 15-year-old south-facing vines and picked from 12 hectares at a yield of 9 t/ha. The grapes were hand-harvested between between 22 and 23.5° balling on 8 and 25 February 2017.
Vinification: 50% cold-crushed at 8 °C, reductive style, skin contact for eight hours, pressing, only free-run juice used, settled for two days at 10 °C; 50% whole-bunch press, reductive style, one-day settling at 10 °C; juice moved to 12% new French oak and the rest to a combination of 2nd, 3rd and 4th fill French oak barrels for natural fermentation (no culture added). Fermented at 13 °C for up to 45 days; barrel-matured for 10 months in tight- grain, medium-toast 400 litre barrels. 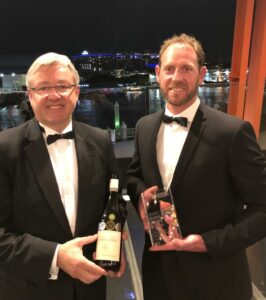